So you think you can’t draw?

The first time I saw one of my Dad’s drawings was last September. We were visiting my brother’s house and my niece was gently encouraging (i.e. pestering) him to draw on her blackboard.

He drew a tree and a boat. At that moment I realised I had never seen my Dad draw before. It was quite a strange feeling. Much like when you see a friend’s handwriting for the first time, it was a curious insight into his personality, his uniqueness.

This human element, this insight into someone’s personality is one of the key reasons I love hand drawn graphics so much.

You just don’t get that with those stock images you see in many PowerPoint presentations and websites. (My personal bugbear are the photos of  glossy ‘office people’ with big teeth and headsets. Who looks like that? Not many folk in Scotland anyway!)

The human element is just one of many advantages of using hand drawn graphics. Yet despite the multiple benefits people often resist picking up the marker and giving it a go. Why is this?

That’s right, it’s because people believe they can’t draw. They don’t see themselves as artistic.

Do you know what response you would get if you asked a child of 4 whether they think they can draw?

They look at you like you’re mad (I’ve tried it.) ‘Of course!’, is the typical response.

What happens when you ask a child of 7 the same question?

Is this because a child’s drawing ability has dramatically changed between the ages of 4 and 7?

No, it’s because by the age of 7 early conditioning will have set in. By this age we’ve often been labelled as either ‘good at maths’, ‘sporty’, ‘artistic’, ‘musical’ etc. It often becomes a label for life.

So perhaps you can draw? Perhaps it’s time to revisit your confident 4 year old self.

The truth is if you can draw a line, a circle and a squiggle then you can draw. It’s all about building on key elements.

After all research has shown that a drawing only needs 30% of reality for it to be recognisable.

Kinda takes the pressure off!

So it really doesn’t matter if your house is a square with a triangle on top, or your stick man looks like he’s had one too many. People will get it. That’s the main thing. It doesn’t have to be perfect to get the message across.

Graphics isn’t art. In fact people with a background in art often struggle with graphics because it is so quick, so simple, so in the moment. There is no room for egos when you’re working live with a group of people. Thank goodness for that.

At the end of every graphics course I run I ask the delegates for some feedback. At the back of my office door I stick up all my favourite comments. This is currently number one: 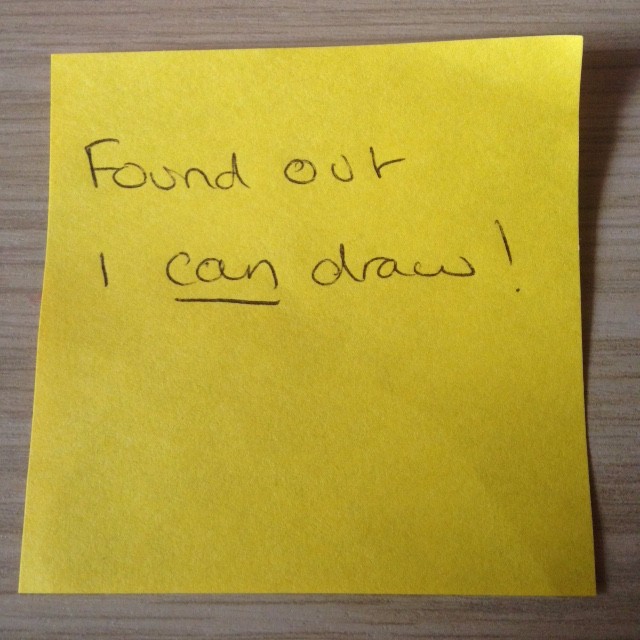 Join me for Secrets of Simple Graphics in Edinburgh on September 5th 2017 and discover what you can do.

Right Brain exercises for getting in the flow

Do you ever feel bombarded with messages that tell you you should be fitter, happier, eat more ‘superfoods’ and use coconut oil instead of shampoo?

It’s quite possibly the worst cloud under which to make plans, set goals and y’know, be a better person.

And the thing is, goals don’t really work if we only use one half of our brains. Typically we set goals using purely the left side of our brain – the side that works with logic, planning, structure and so forth.

Sure, all that is important but if we really want to set goals we are aligned with and feel excited about then it’s important to tap into the right side of our brain – the side that speaks to our creativity, intuition and imagination.

Here are a few fun exercises to wake up the right side of your brain:

* Draw a picture of a loved one, family member or pet without looking at the page you are drawing on (I can see that one turning into quite a fun dinner party game come to think of it).

* Impress your friends with your new juggling skills. Yes, that’s right, you too can juggle with the aid of a friendly satsuma. Your task here is not to look at the satsuma but to stare at a fixed point in the distance whilst maintaining a sense of calm and dare I say it, smugness.

Exercises like these help us get into the flow of creative thinking. It’s when we’re in the flow that we get our best ideas. It’s one of the reasons I love drawing so much. It’s so absorbing and refreshing to be using the right side of the brain, especially when we live in a society which is oh so left brain orientated.

Give these exercises a go, and as always, let me know how you get on!

Want to learn more? Join me for Secrets of Simple Graphics on September 5th 2017.

In the market for markers? Here’s a 20% discount

This post was initially emailed to my subscribers on December 3rd, 2015.

I’ve spoken about markers before, and for some time Berol were my absolute favourite. That was until I discovered Neuland NoOne….

Not only are these gems chisel tipped and non-permanent, they come in a giddily satisfying range of colours and they are refillable.

Impressed? You should be.

And if your excitement hasn’t yet reached fever pitch then how about a 20% discount?

I’ve negotiated a deal with Pinpoint Facilitation (the only suppliers of Neuland markers in the UK) whereby you, my lucky subscriber, can avail of a 20% discount by using the code:

when you buy regular sized markers online at http://www.pinpoint-facilitation.com/facilitation-equipment/pens-markers-and-refills/neuland-no-one-pens

when you buy super chunky markers online at http://www.pinpoint-facilitation.com/facilitation-equipment/pens-markers-and-refills/neuland-big-one-markers

P.S. The discount is available until the exchange rate changes or Neuland increase their prices (Apologies I haven’t been able to Pinpoint a specific date…)

This website uses cookies to improve your experience while you navigate through the website. Out of these cookies, the cookies that are categorized as necessary are stored on your browser as they are essential for the working of basic functionalities of the website. We also use third-party cookies that help us analyze and understand how you use this website. These cookies will be stored in your browser only with your consent. You also have the option to opt-out of these cookies. But opting out of some of these cookies may have an effect on your browsing experience.
Necessary Always Enabled
Necessary cookies are absolutely essential for the website to function properly. This category only includes cookies that ensures basic functionalities and security features of the website. These cookies do not store any personal information.
Non-necessary
Any cookies that may not be particularly necessary for the website to function and is used specifically to collect user personal data via analytics, ads, other embedded contents are termed as non-necessary cookies. It is mandatory to procure user consent prior to running these cookies on your website.
SAVE & ACCEPT